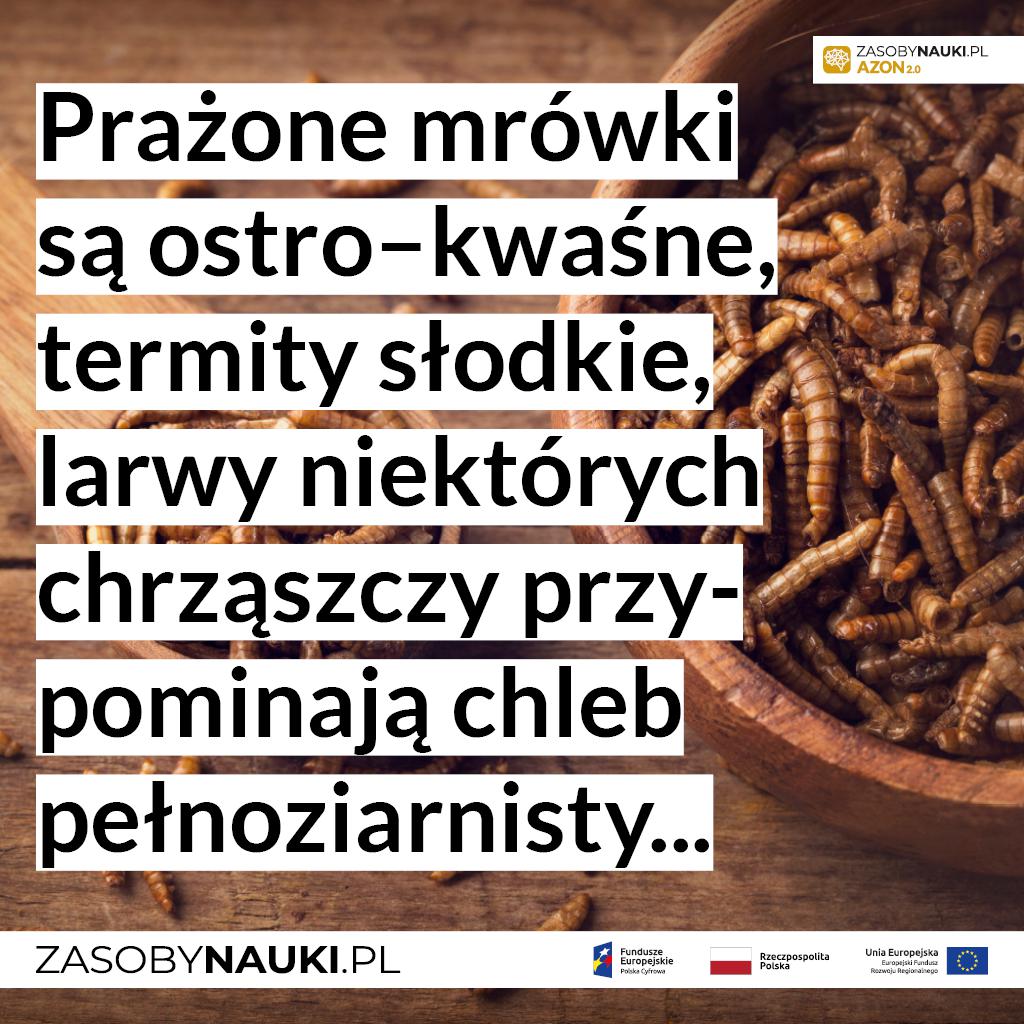 By 2050, the population of our planet will increase to 9 billion. It will be necessary to increase food production by 70%. However, agricultural areas may increase by a maximum of 20%, and animal husbandry is ineffective and expensive - all this means that we have to look for new sources of animal protein.

Although it seems incomprehensible to Europeans, it is insects that can be an alternative to meat - argue the authors of the film deposited on the AZON platform (https://zasobynauki.pl/zasoby/jadalne-owady,37868/).

Insect protein has all the necessary exogenous amino acids, i.e. those that the body cannot synthesize on its own and which must be supplied with food: phenylalanine, isoleucine, leucine, lysine, methionine, threonine, tryptophan, valine. For example, cricket has almost twice as much protein compared to beef. Twice the most important amino acids. Three times more iron and over 30 times more vitamin B12. In addition, more calcium than milk and e.g. vitamin A.

The average protein content of edible insects is 42% for beetles and 63% for crickets, grasshoppers and locusts.

The protein content of edible insects obviously depends on the development stage: in adult forms (imago) it is usually higher than in larval forms, but also in terms of food. Bran-fed grasshoppers have almost twice the protein value of corn-fed grasshoppers.

In turn, the energy value of edible insects depends mainly on their fat content. Larvae and pupae are usually richer in energy compared to adults because they contain more fat. The average energy value is 400 - 500 kcal / 100 g of dry weight.

Depending on the species, development stage and preferences, insects may undergo various culinary processes. They can be fried, baked, boiled, pickled, smoked or dried. Then they differ significantly in taste. However, their taste can always be compared to the taste of dishes known to us. For example, roasted ants are spicy-sour, termites are sweet, the larvae of some beetles resemble whole grain bread, woodworms - fatty meat, dragonflies and some moths - fish, and wasps have a pine flavor. When deep-fried, the insects are crunchy and crisp, and their food often resembles eating crackers or crisps.

The most eager and most frequently eaten insects are in the early stages of maturity, i.e. the larvae. They contain very little chitin, which is irritating to the digestive system. As a result, they are better absorbed by the human body.

From January 1, 2018, entrepreneurs can sell insects as food in Polish stores, provided that they obtain a relevant permit from the European Commission.

Link to the movie: https://zasobynauki.pl/zasoby/jadalne-owady,37868/